Recently, quarterback Colin Kaepernick has received  backlash for his recent decision to not stand up during the National Anthem.  Many athletes have voiced their support and others voiced their disdain with his decision. When asked why he chose not to stand, Kaepernick stated 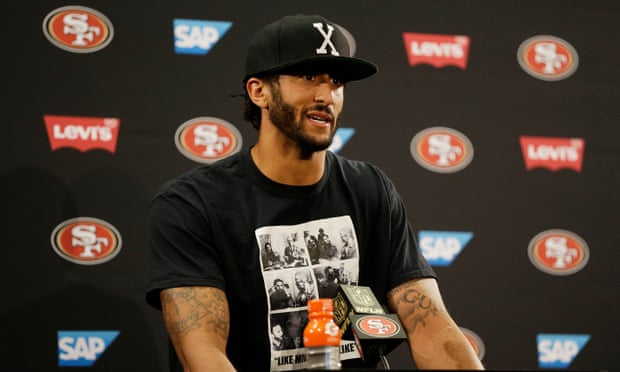 “I am not going to stand up to show pride in a flag for a country that oppresses black people and people of color” Kaepernick told NFL Media in an exclusive interview after the game. To me, this is bigger than football and it would be selfish on my part to look the other way. There are bodies in the street and people getting paid leave and getting away with murder.”

I love when athletes and people with a platform use that platform to bring light to problems in the African American Community.  Many people took offense , saying that this decision was “unpatriotic” and  that Kaepernick was spitting in the face of veterans. Ironically, Kaepernick addresses this in the same interview, stating:

“I have great respect for men and women that have fought for this country. I have family, I have friends that have gone and fought for this country.
They fight for freedom. They fight for the people, they fight for liberty and justice for everyone. And that’s not happening.
People are dying in vain because this country isn’t holding their end of the bargain up, as far as giving freedom and justice, liberty to everybody. It’s something that’s not happening.
I’ve seen videos. I’ve seen circumstances where men and women that have been in the military have come back and been treated unjustly by the country they fought for and have been murdered by the country they fought for, on our land. That’s not right.”

It’s always interesting when athletes address issues and actually want to be seen as individuals with opinions on issues, people will try to silence them. It is very disheartening when African Americans try to speak up , people will do everything to discredit or diverge from the problem instead of looking for solutions to these problems.  Our Military and veterans fight for our right to have free speech and that is exactly what Kaepernick did.  It infuriates me when people actually stand up for equality people will try to silence them , but this isn’t surprising.  In recent years when African Americans say “Black Lives Matter” people are so quick to say “All Lives Matter”. This just shows how ignorant you are. The same things that Muhammad Ali were praised for , Kaepernick is being prosecuted for , it just shows me the insincere love for black athletes. It is not a hard concept to understand, African Americans are tired of being treated worse than other American citizens. “Liberty and Justice for all”  is not being afforded to all citizens and police brutality has gotten worse year by year.  You do not have to stand for the national anthem or pledge of alliance.  You can be angry or mad but Kaepernick did not break any laws.  It is Colin’s 1st amendment right to not want to stand and speak out , the same thing veterans fight for.  There will always be someone that says something you do not like or agree with but that is their right to voice their opinion.

I have the upmost respect for veterans, but I do not understand how people  are angry at Colin for speaking on issues that effect American Citizens.  Colin is bringing awareness to issues that if solved could make America better.  It is not a hard concept to understand, as to why Kaepernick did not stand. When the National Anthem was made , African Americans were slaves.  I hate when people ignore the reasons why people feel this way.  The Anthem was never made to represent us.  The third stanza even celebrates killing slaves :

And where is that band who so vauntingly swore,

That the havoc of war and the battle’s confusion

A home and a Country should leave us no more?

No refuge could save the hireling and slave

From the terror of flight or the gloom of the grave,

And the star-spangled banner in triumph doth wave

O’er the land of the free and the home of the brave.

Francis Scott Key was a racist slave owner from Maryland who profited off the work of slaves. His whole family generated wealth of the work of Slaves and constantly spoke negatively on African Americans.  Key has said publicly that African Americans are “a distinct and inferior race of people, which all experience proves to be the greatest evil that afflicts a community.” With all of this being said I do not understand how you do not know where Kaepernick is coming from.  America has come a long way, but it still has a long ways to go before things are truly equal and fair.

I feel as though people tried their hardest to discredit and stray away from the problem at hand.  To completely flip a situation to fit your narrative is ignorant and very harmful to what activists and protesters are trying to do.  One thing that I find funny is how people went out of their way to disrespect Colin, going so far as to call him a “Nigger ” and a “Terrorist” which proved his own point and  showing the true colors of were Americans stand in 2016.  These same people who are in uproar about Colin  “disrespecting” veterans but won’t volunteer or donate to help these same veterans they “value”.  It be a lot easier to just say you don’t value black lives instead of trying to weak arguments to discredit valid points.  Their is a clear contrast between the Ryan Lochte situation where people were trying their hardest to make excuses for a man lying , and this situation were Colin is actually speaking on real issues.